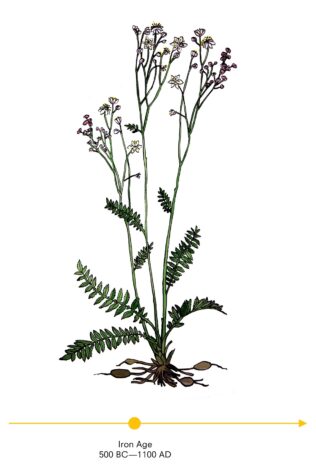 Dropwort originates from the Eurasian steppe. It is an anthropochorous archaeophyte (spread by humans long ago) in Finland, whose distribution is largely limited to Southwestern and Southern Finland and Häme. The distribution follows Bronze and Iron Age inhabitation, and larger populations of the species are often found at prehistoric inhabited sites. Dropwort is thus held to be a good indicator species for inhabited sites of the Metal Ages. It grows on dry chalky roadsides, road banks, dry meadows, sloping meadows and rocky ground. The slender tubers were eaten by people during at least the Viking Age. They are also liked by pigs. Dropwort grows in the meadow by the road leading from the quay to Fogdeby. No archaeological excavations have been done at the site, but it has likely been inhabited dring the Metal Ages. 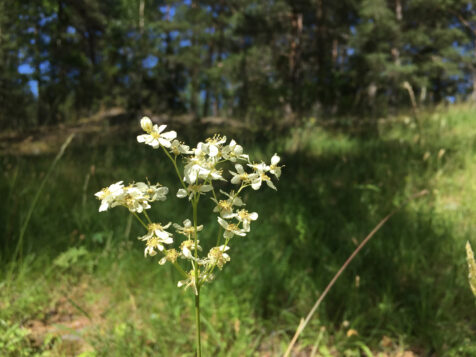 Dropwort is an Eurasian Steppe plant, which grows at its northern limit in Finland. It is clearly an archaeophyte brought by humans, a prehistoric “invasive species”. In the early centuries AD the inhabitants of southern Finland cleared river banks for pasture and fields. This allowed so called steppe plants to spread; these include remnants of the post-glacial steppe such as dropwort and hare’s-foot clover.

The open countryside near Iron Age inhabitation helped these plants establish themselves in Finland. Dropwort is almost entirely found at Bronze and Iron Age inhabited sites in southwestern Finland. The plant has helped archaeologists find such sites. Dropwort tubers have been found in Iron Age graves and at inhabited sites. They were eaten by both animals and humans, and were still being collected as famine food in the 19th century. Heating the (otherwise bitter) tubers gave them a mild nutty flavour.

The tubers can remain viable for decades underground. The seeds have also been found to have a good germination capacity in experiments. The plants remained at their cleared site, and only spread further with humans. Free-roaming domestic animals fertilised the plants, increasing the yield of tubers. Experiments where nitrogen fertiliser was given to the plants yielded tubers dozens of times larger in size, with a starch content comparable to potatoes. Their nutritional value was thus high. Plants that have maintained a population at a site for centuries are a good indicator of Iron and Bronze age inhabited sites.

Dropwort tubers have also been used medicinally. The roots and shoots contain tannins and salicylic acid. This gives the tubers their bitter taste. The roots, flowers and leaves have been used to treat rheumatism and gout. The tubers are said to have been used to treat tumours and cancer in Russia. Elias Tillandz, professor of medicine at the Royal Academy of Turku, called dropwort ”Filipendula saxifraga rubra” in the 1683 list of plants of Turku and its surroundings.

At Seili, dropwort grows in the rocky meadow by the side of the road to the quay, near the old sauna. This site has shrunk considerably during the past decades. Another small population by the side of the road to Vaarama villa has almost entirely disappeared. Dropwort has declined radically due to the near-complete disappearance of cattle pastures and the subsequent reforestation of the sites. This has also happened at Seili.

Associate Professor Terttu Lempiäinen, Herbarium of the University of Turku