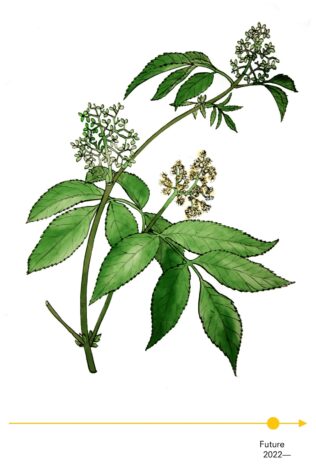 Red elderberry is native to Southern and Central Europe, where it has been grown as a useful plant and ornamental since the 17th century. It is an archaeophyte in Finland, with thousand year old seeds having been discovered in archaeological excavations in southern Finland. Red elderberry is nowadays a common garden escapee in southern Finland. It is also a pioneer species, spreading wherever space appears. Red elderberry is often found in nutrient-rich places, near middens, cow sheds or outdoor toilets. This gave it one of its common names in Finnish, “paskamarja” (dungberry).

The berries of red elderberry are mildly poisonous, but are eaten by birds, who spread them into the nearby forest. Red elderberry is nowadays classed as an invasive species. It started spreading from gardens to the surrounding nature during the early 20th century, creating thickets which slow down the natural development of the forest. At Seili, red elderberry has been planted in the inner courtyard of the main building. Escapees have not yet been observed on the island. 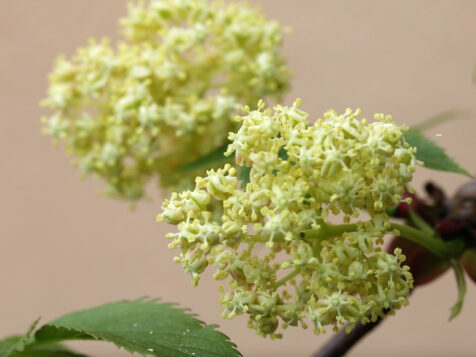 Plant species are often envisioned as either belonging to a site or being out of place there. Species that have travelled between countries or continents with humans are called invasive species, archaeophytes or neophytes, while plants that spread from gardens are garden escapees. Native species, on the other hand, are plant species which are held to occupy their natural range. Such plants may form a part of the national landscape.

The terminology that describes the spatial belonging and nationality of plant species often assigns values to the species. Many archaeophytes are viewed positively; e.g. cultivated plants that are useful to us. Species that are classified as invasive species or garden escapees, on the other hand, are viewed as threats or intruders, and are not felt to belong to Finnish nature. This rests on the realisation that invasive species and escapees may threaten species that are held to be natives, and may decrease biodiversity.

Invasive species and garden escapees may sometimes be referred to as enemies, and the language used can resemble that used for unwanted foreigners. However, many people view them as cherished and traditional garden ornaments. Attitudes to invasive species have also varied: Finns were once encouraged to plant beach roses in their gardens, but nowadays the law demands that they be eradicated.

A wide variety of different species, popular in their time as ornamentals, have been grown in the gardens and in the hospital courtyard at Seili. These include red elderberry, lilacs, bleeding heart, orange lily and peonies. The garden lupin was also once favoured, but it is now being eradicated from the island after being classified as an invasive species. 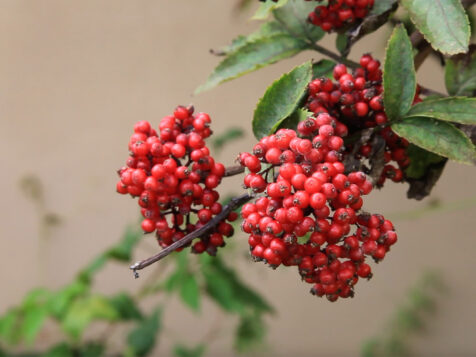