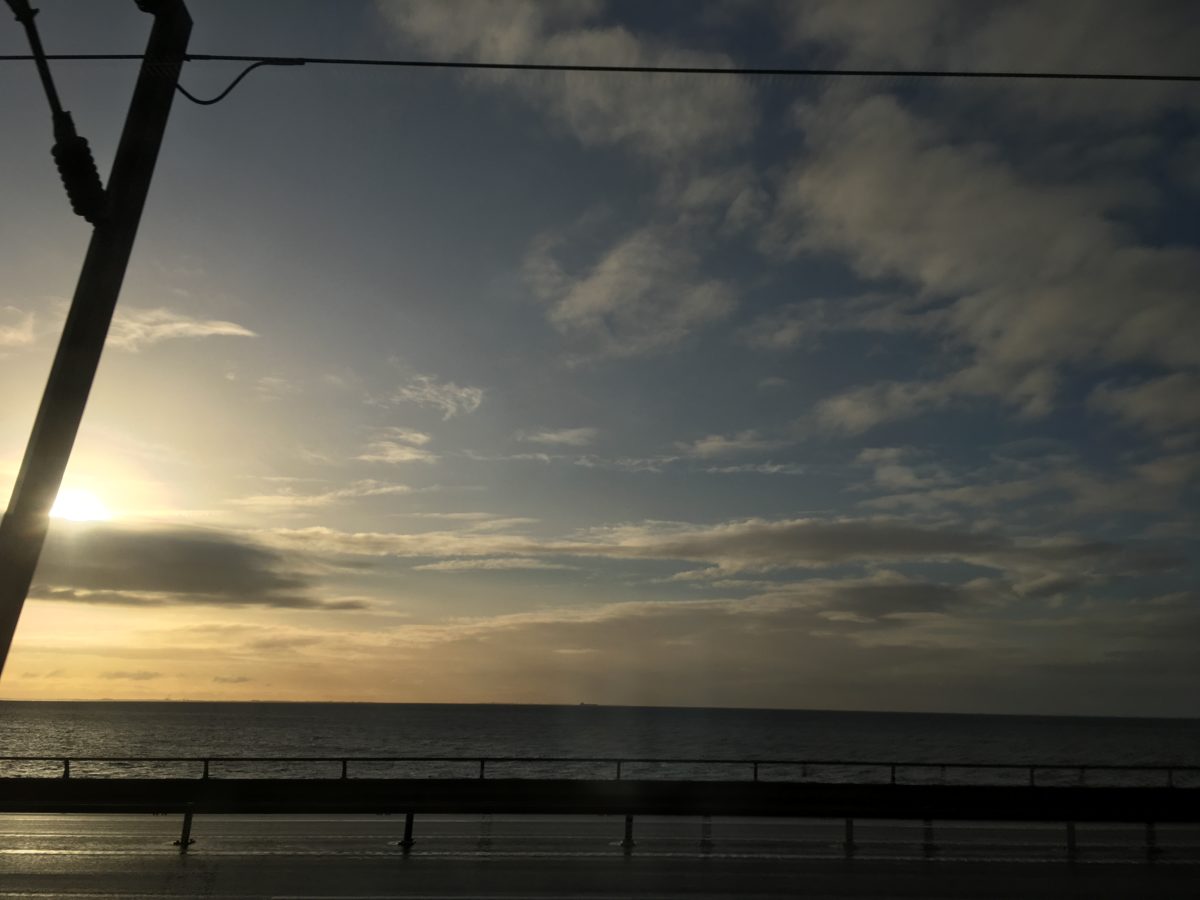 CAA is committed to supporting other than air travel options for artists taking part in our activities. This year we focus on researching different ecological alternatives and the wider implications of these changing practices. Some travel notes below by Taru Elfving along one of the possible routes between the Archipelago Sea and the rest of Europe.

For some time now, I have been hoping to try out slow travel between my current nest in Helsinki and London, which I used to call home for many years. The main reason, naturally, is the necessity to cut air travel in response to the escalating climate crisis. But I have always preferred trains to planes anyway. For me slowing down implies touching down, getting back in touch with my surroundings, which today feels more urgent than ever – and not only for ecological reasons but also for social and subjective sustainability. Slowing down does not only happen in a linear sense of time. It implies a radically different sense of space-time. Feet (almost) on the ground, my mobile perspective remains grounded in the surrounding landscape. The distances unfold in sync with my embodied experience of them, while the passing view allows glimpses of different ecosystems, ways of life, and seasonal changes. Furthermore, it is necessary to stop every so often as there are only so many direct train connections and surprisingly few night trains across Europe. Travel doesn’t thus only happen between A and B, but it is possible to connect with people and places along the route. Travelling slow encourages travelling less, but making more out of the journey. I would know my neighbours so much better if I travelled more by train and could regularly stop by for studio visits or a quick coffee with colleagues and friends in Sweden, Denmark, and beyond.

I seized the opportunity to take the train, when I was invited to attend a seminar at the Art Academy in Malmö, Sweden, two days before I was due to be in conversation with the artist Tuula Närhinen at Beaconsfield Gallery in London to open the Below Zero Prize exhibition. I started writing this on the train somewhere in Denmark, approximately half way through the full journey. From here Finland appears like an island, as the rail tracks to the rest of Europe can only be reached once across the Baltic Sea. To get this far, I had already taken a train in Finland and an over-night ferry to Sweden. I had a breakfast meeting in Stockholm with the artist Mirko Nicolic to discuss our ongoing collaboration on (non-)extractivism before taking the train to Malmö for the night. As it has been a winterless winter in Helsinki this year, I truly enjoyed the glorious snowy vistas that appeared en route like an unexpected frozen zone before the flooded fields of southern Sweden. After my seminar day, I continued to Copenhagen, where I met another colleague Luis Berrios-Negron for dinner to plan Transhemispheric dialogues between the Caribbean and the Baltic Sea archipelagos. Early next morning I got on the train heading towards Brussels. First there were wind turbines everywhere, dotted across the incredibly flat landscape. More flooded fields followed. Then the picturesque rural landscape gradually transformed into the industrial Ruhr region.

My train was a little late and I would have missed the last train to London. Luckily, I had booked a hotel, and was prepared to stay in Brussels for the night. On Saturday morning, I had aimed to catch an exhibition in the city, but decided to go for a walk instead, much needed after a twelve-hour travel day. Then it was only a quick train ride to the UK, where I looked forward to catching up with FRAUD, Matterlurgy and Autogena Projects on their current research and future plans with CAA on the island of Seili.

This slower journey would not have been possible without the support of Malmö Art Academy, Beaconsfield Gallery, Below Zero Art Prize, and Finnish Institute in London. CAA is able to offer ecological travel options thanks to the Kone Foundation funding.