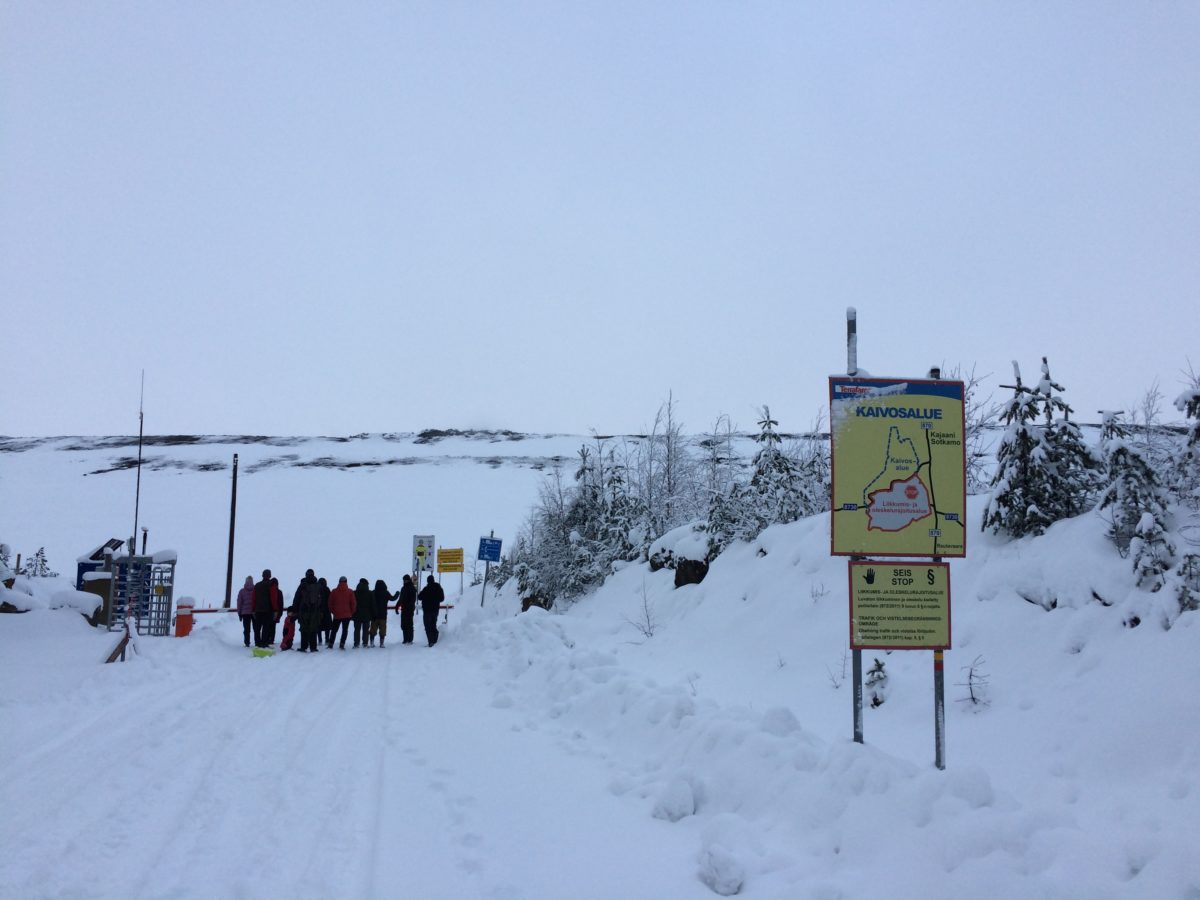 Notes from Talvivaara – The Winter Hill

In November, CAA took part in a field trip to Talvivaara mine as part of the workshop Pluriversal Conversations: anti-/non-/post-extractivist culture 2019. Below are some reflections by Taru Elfving:

A dozen black grouse dot the sparsely snow-covered mound of dark rock as we approach the gate to the Talvivaara mine area. They take off and fly right above us showing off their beautiful lyre shape tails as we get out of the cars. A number of warnings and stop signs, a tall fence, gates and CCTV cameras greet us. The dune of stone rubble rises as high as the tallest spruce trees in the surrounding forest. It continues in both directions like an impenetrable wall between the public road and whatever lies on the other side, out of sight. I squint my eyes and wonder whether it is merely fog or low-lying cloud, or is there vapour of some kind rising from behind the mound. It was not here less than two years ago, the artist Arja Renell tells us. All this crushed stone has been driven over here from the mine – unearthed yet unusable, now tentatively forming new unpredictable relations between the broken earth and the elements in the open air. Actually, the impacts are not so unforeseeable after all, geologists would say. Deep time transformations are here for all to see, and to smell. A slight whiff of sulphuric acid lingers in my nose as we get back in the cars.

Those graceful birds may have been sitting there to warm up, someone suggests. Moose have been known to wander often around the mine areas that are closed to people, especially during the hunting season. The right to roam does not apply here to humans. If we can smell the acid in the freezing air, I wonder what the animals may be ingesting in these woods. One public road still traverses the vast area, but the tall banks of rock follow alongside it like some medieval or colonial – or neo-fascist – fortress walls. We stop at the only place where the actual mining activities are still visible. Bright green liquid flows out of a large pipe onto one of the two ponds close to the road. A couple of cars drive past us, on the other side of the fence. Otherwise everything appears eerily still.

The nickel and zinc mine is called Talvivaara, meaning “winter hill” in north-eastern Finnish dialect, named after a nearby forested rocky hill. Terrafame – some wicked mind came up with a new name for the revamped mining company as the state bailed out the private business when it went bankrupt following years of irresponsible destruction of the environment and, most of all, the waterways in the region in what has been acknowledged as the biggest environmental disaster in the peacetime history of independent Finland. Translating as “the land of hunger”, the name Terrafame appropriates the tragic historical fame of the Kainuu region, where large proportions of the poor population died in the many tough years leading up to the twentieth century. The poverty in the region is in part associated with the tar business, the origin of forest and other extractive industries as well as global trade in Finland. Kainuu has been the centre of tar production since the seventeenth century, yet the wealth accumulated in the coastal areas, where tar was shipped to European empires and their maritime fleets. Now the ecosystems of the nearby lakes and rivers have been dramatically affected by the waste waters from the mine, with all the salty water forming an anoxic stratum at the bottom, like in the brackish waters of the Baltic Sea. The excavated rock will continue producing sulphuric acid for thousands of years to come, while there is also uranium exposed in the expanding mounts of earth.

When the warning signs no longer line the snowy forest, we drive past a group of hunters. All dressed in luminous orange vests they have gathered around a small open fire on the icy road. Coffee break, I guess. A grand moose lies lifeless in the snow behind their car. It may well have spent a good few years enjoying the relative peace provided by the mine area. Now it will in turn provide sustenance for the locals, while allowing them to pass down through the generations some remnants of traditional modes of life – here in the expanding shadow of the unsustainable extraction fuelling the increasing global hunger for metals and minerals today. On a train back south, typing these notes to be shared online, I attempt to make sense of my own entanglement in these disrupted cycles and chains of life and death.

Artist Arja Renell’s committed long-term work with the local activists, researchers and fishermen allowed us invaluable insights on this field trip to Talvivaara mine, part of the workshop Pluriversal Conversations: anti-/non-/post-extractivist culture. My warmest gratitude to the organisers Pluriversal Radio: akcg (anna kindgren and carina gunnars), Elin Már Øyen Vister, mirko nikolić – and all the inspiring contributing artists and activists for their persistent work and generosity in the face of these shared urgencies. 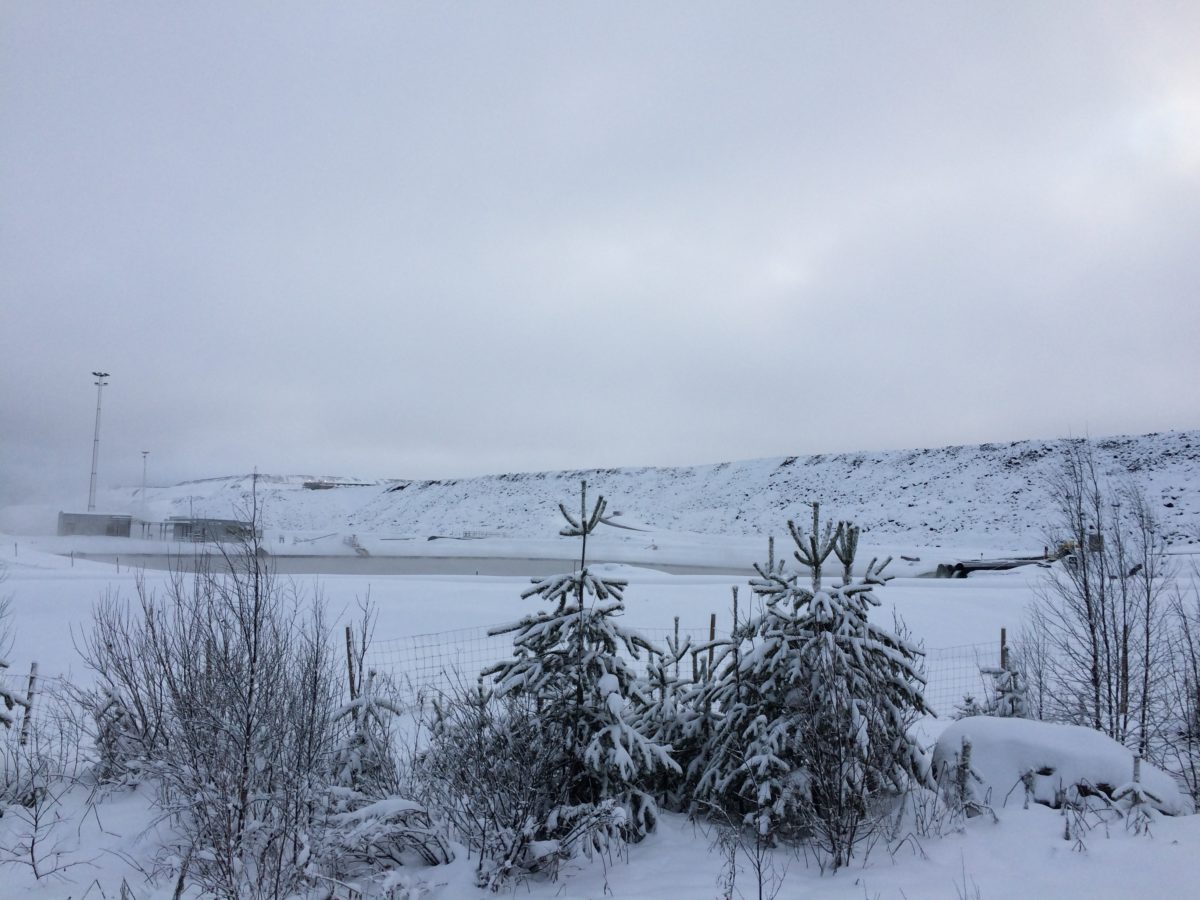 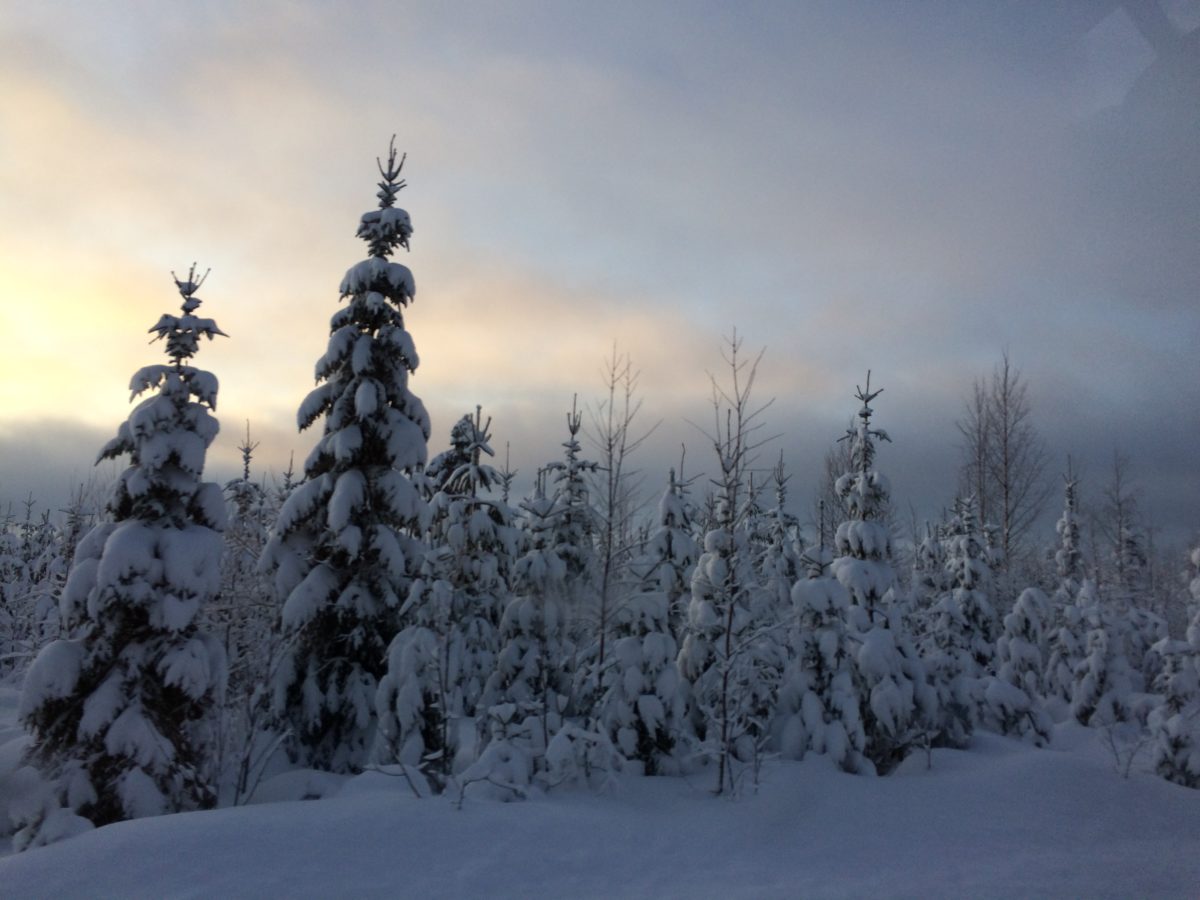